Lignans are broadly distributed in plant origin. It is present in more than 55 plant families, where they function as defense molecules against harmful fungi and bacteria and antioxidants.

The physiological and epidemiological studies in humans have shown that lignans can exert a beneficial effect in preventing lifestyle-related diseases. The list may include cancer and diabetes type of complications. For example, distinct types of estrogen-related tumors can be lessened with the dietary input of these polyphenols. I.e. breast cancer in postmenopausal women.

Apart from it, few lignans have furthermore stimulated pharmacological interest.

The formation of lignans includes the pathway, which starts from 3 of the 4 greatly common dietary hydroxycinnamic acids.

Therefore, they come from the shikimic acid pathway by phenylalanine.

Flaxseed, often known as linseed is the richest source of lignans. Other important sources are sesame seeds and whole grains. Secoisolariciresinol and Matairesinol were the first lignans specified in foods. Some other foods are there, that contain lignans/SDG but concentration from 100-1000 times lower than that of flaxseed. Some of them are-

The consumption of dietary lignan depends on the geographical location but of course, diets are moreover subject to ethnic and cultural group influences.

Conclusion–The Asian diet has grabbed the first position to have the highest intake of lignans in their diet. Which also concludes, a higher bioavailability. It is because of high vegetable consumption and the infusion of lignan-rich plants in medicines.

After the consumption of plant lignans, they go under the metabolism process by intestinal bacteria. They are then transferred into mammalian lignan before the process of absorption. This ultimately, reduces the risk of various types of cancer, specifically of the prostate, colon, and breast ones. Several studies confirm a positive correlation between plant lignan consumption and enterolignan levels. Enterolactone and enterodiol are the first lignans to be detected in human biological fluids, post-ingestion of lignans. 13-5 hours respectively are the half-lives of these compounds and they continue to be detectable even after 8 to 10 hours of their consumption. 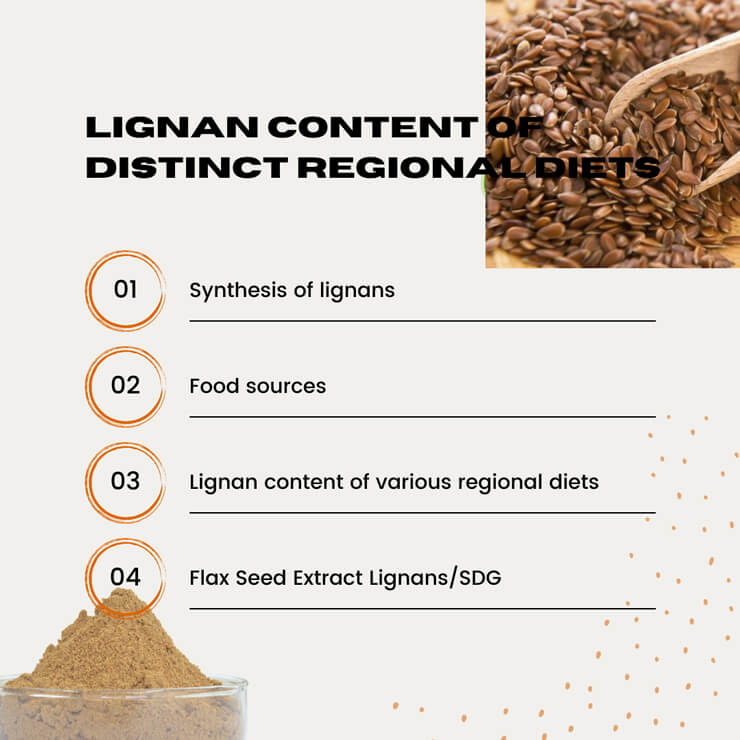