Cordyceps is a medicinal herb from mushrooms. The Cordyceps mycelia were used way back a long time ago in traditional Chinese medicines. Cordyceps is nowadays available as a dietary supplement. Cordyceps mycelia provide various health benefits and also has a few side effects. It can help with multiple health issues and provide benefits such as antioxidants and anti-inflammatory.

The cost of Cordyceps found in the wild is prohibitive in China. In addition, the estimated value of a 1 kilogram of wild Cordyceps is around $20,000. The use of Cordyceps is for medicinal purposes. Many people often use it as a natural energy booster. In addition, many people claim that cordyceps can protect from health issues such as diabetes, fatigue, high cholesterol and depression, asthma, etc. Products that contain cordyceps mycelia powder are in high demand cause of such benefits.

Performance Boost is one benefit you may get from taking cordyceps. Studies show that y taking these herbs, the oxygen intake in the human body increases, thus resulting in a good performance. However, that may not be the case, as the study shows no performance boost results for trained athletes. In addition, cordyceps has properties such as anti-aging and is taken by older adults to reduce fatigue.

Researchers believe that the antioxidants in Cordyceps mycelia powder have potential anti-aging properties. Moreover, the cordyceps is also thought to slow down tumor growth. Therefore, the fungi available in the cordyceps could be the reason for slowing tumor growth. Furthermore, heart Health benefits are also found in the cordyceps herbs, and it helps by decreasing the bad LDL cholesterol. In addition, the Cordyceps can Fight Inflammation by suppressing the Inflammation with unique proteins that cordyceps release.

Side Effects Of Cordyceps

It is recommended not to use cordyceps for long as they can have minor side effects. Using it for a short amount of time is considered to be safe. However, the side effects of Cordyceps can be seen as diarrhea, nausea, stomach ache, dry mouth, etc. There are a few preventive measures before taking cordyceps mycelia powder.

People with diabetes should not consume cordyceps with diabetic medication, as the outcome of doing so could be a drop in blood sugar. In addition, people allergic to yeast and mold could face allergic symptoms from Cordyceps. The metallic taste is also one of the issues that may arise after using cordyceps products. There are many more things that need to avoid while taking cordyceps. In addition, you should consult a professional before taking these products.

How To Intake Cordyceps Mycelia Powder?

The cordyceps mycelia powder is excellent for the immune system and works as a supplement for various health benefits. Raw mushrooms are not edible; therefore, you must prepare them. However, some powders can be taken by adding them to shakes. There is not any particular rule for taking cordyceps supplements.

In addition, one thing you can take care of is taking the dosage in the recommended amount, and taking more than prescribed could hurt your health. The Cordyceps supplement comes in various forms, such as capsules, raw mushrooms, powders, and tablets. Take the dosage recommended on the product package, and keep checking the impact of Cordyceps on your health.

The health benefits that Cordyceps provides are great for various body parts. Cordyceps may have some common side effects, but proper use can provide relief from the disease. One thing is for sure the cordyceps can be used to boost energy and strengthen your immune system. 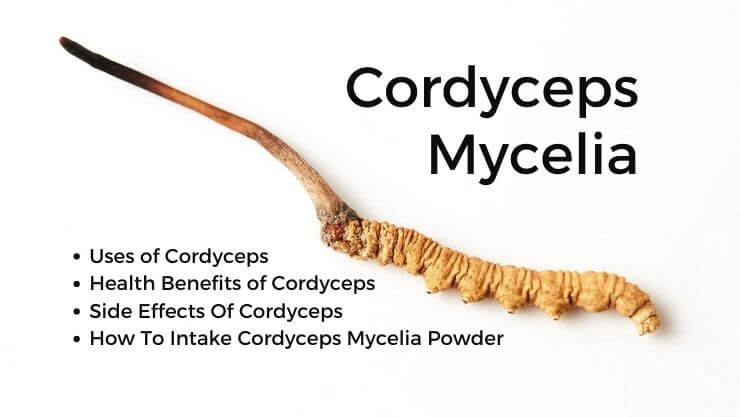