It mainly contains proanthocyanidins, resveratrol, quercetin, and other flavonoids. Oligomeric proanthocyanidins have many biological activities, such as scavenging free radicals, antioxidation, protecting heart and brain vessels, anti-inflammatory, tumor inhibition, and so on, Peanut skin is a potential source of natural polyphenols antioxidants. Resveratrol is a plant antitoxin. It has been found that it has obvious effects on inhibiting cancer cells, reducing blood lipid, preventing cardiovascular disease, anti-oxidation, and delaying aging, and is called another green anticancer drug after paclitaxel. The primary anthocyanin is formed by the polymerization of catechin and epicatechin, which has strong biological activity. Its main physiological activity is to remove the excess free radicals in the human body, improve the immune ability of the human body, and have the strong anti-oxidation ability. It can be used as the main effective component of anti-cancer, anti mutation, and cardiovascular disease drugs, and can be used as a new type of natural antioxidant with safe and non-toxic.

The oil content of peanut red coat is more than 17%. The white wax precipitate at the bottom of the oil separated from the peanut red coat contains mainly “bihenic” and “lignosoric” long-chain saturated fatty acids, which are mainly used for beauty and muscle health. According to the latest research by Richard, a scientist from the U.S. Department of agriculture, peanut red clothes can be used to produce skincare products that can lubricate the skin, as well as shampoo and hair care products.

The results show that peanut red coat is an excellent natural pigment, which is not only safe but also stable. It has a very important application in food. The red pigment of peanut red coat is reddish-brown powder, soluble in water, ethanol, and methanol. The main components are flavonoids, which are stable to light, heat, and pH. metal ions have little effect on the pigment; The effect of H2O2 on the pigment was slight, but Na2SO3 on the pigment was not obvious. Sucrose could increase the color of the pigment. It is mainly used for coloring western-style ham, cakes, sausages, etc. It can also be used as a food additive to process health food such as peanut red-coated soft enamel, cola beverage, syrup, peanut red-coated slice, etc. 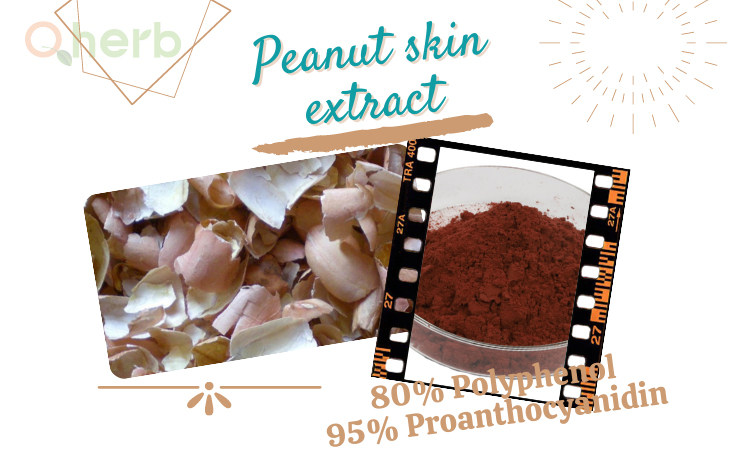