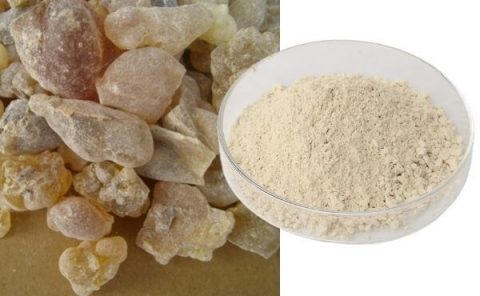 Boswellia Serrata Extract
Latin Name: Boswellia Carterii Birdw
Specification: 4:1, 60% -65% Boswellic Acid
Description:
Boswellia, also called olibanum, is an aromatic resin obtained from trees of the genus Boswellia. It is used in incense as well as in perfumes. There are numerous species and varieties of frankincense trees, each producing a slightly different type of resin. Differences in soil and climate create even more diversity of the resin, even within the same species.
Boswellia trees are also considered unusual for their ability to grow in environments so unforgiving that they sometimes seem to grow directly out of solid rock. The trees start producing resin when they are about 8 to 10 years old. Tapping is done 2 to 3 times a year with the final taps producing the best tears due to their higher aromatic terpene, sesquiterpene, and diterpene content.
Function:
Boswellia acts as a spiritual symbol and as Boswellia medicinal herb; It seems to function as both an analgesic and an anti-inflammatory. Reports and personal claims indicate that the Boswellia herb may be used in connection with joint mobility, pain, and stiffness, and may be a useful remedy for a variety of inflammatory diseases, including bursitis, osteoarthritis, and rheumatoid arthritis.
The gum oleoresin consists of essential oils, gum, and terpenoids. The terpenoid portion contains the Boswellic acids that have been shown to be the most important active constituent is Boswellia. Currently, most extracts are standardized to contain approximately 37.5-65% Boswellic acids.