Home
News
Why is Ginsenoside known as a life-saving extract?

Why is Ginsenoside known as a life-saving extract?

Ginsenoside is the main active ingredient of the ginseng plant of the genus Araliaceae. Studies have found that such compounds have strong activity in the prevention and treatment of cancer. With the deepening of research, it has been found that the anti-tumor effect and mechanism of human saponins are more extensive. Ginsenosides can act on cancer cells, inhibit tumor growth by inducing apoptosis, or induce their differentiation to reverse; can inhibit tumor metastasis by acting on multiple aspects of tumor invasion; can reverse tumor drug resistance, high chemotherapy.

The anti-tumor activity of the Ginsenosides; it can also enhance the body’s resistance to disease by affecting metabolism and regulating immune function, thereby inhibiting the growth of the tumor; it can also affect the cell-linked communication or inhibit the activity of the enzyme to antagonize the action of the carcinogen. The role. This article briefly introduces the research progress of anti-cancer effects and mechanisms of ginsenosides.

Nowadays, the health products containing Ginsenosides RH2 in the market are rare, because the extraction process is complicated and difficult, and the development cost is high. Therefore, the raw material price of high-purity RH2 on the market is several hundred thousand yuan per kilogram. At present, there are very few R&D and production enterprises that can achieve batch extraction in China, the most famous of which is the Northeast Ginseng Research Institute of Hainan Asia Pharmaceutical Group. The institute has obtained four national patents for the development and extraction of rare ginseng saponins. The content of ginsenoside RH2 reached 16.2%, and the effective concentration was the best, which was acceptable to ordinary patients and created a new gospel for the general public.

Why is ginsenoside Rh2 called “life-saving”?

Ginseng is called as the “King of Herbs” for its magical effect of “compensating for light and extending the body”. It is a valuable Chinese herbal medicine. Ginsenosides Rh2 is a protopanaxadiol-type low-sugar chain saponin monomer isolated from ginseng, which is now attracting more and more people’s attention. The image of the used consumer is called “life-saving”.

The anti-tumor effect of ginsenoside Rh2 is mainly manifested in:

Cancer patients and their families have increasingly concerned the excellent effect of Ginsenosides Rh2 on anti-tumor, and the anti-tumor effect of ginseng soap Rh2 can be used in combination with traditional surgery, radiotherapy, and chemotherapy. It plays a role in controlling tumor cells and can prevent tumor recurrence and metastasis after treatment. It can effectively prolong the life of patients with cancer and improve the quality of life of patients.

If the immune function is dysfunctional, the immune surveillance function will not be able to clear the mutant cells, which is one of the causes of tumors. Ginsenosides Rh2 can regulate and enhance the immune function of the body through various ways, and has a protective effect on the immune system. As an immunoregulatory factor, ginsenoside Rh2 can also promote the synthesis of albumin and gamma globulin, enhance the function of T cells and macrophages, and thus inhibit the proliferation of tumor cells, and also inhibit the chromosomal mutation of normal lymphocytes and stabilize immunity. System to achieve anti-tumor effects.

Ginsenoside Rh2 is called “protective”. It has an anti-fatigue effect

China’s sports fatigue damage research has found through a large number of clinical observations that regulating carbohydrate metabolism is a key issue in the treatment of sports fatigue injury. Sugar is an important energy source in the body’s activities.  The results of experiment showed that the content of muscle glycogen and liver glycogen in the high-dose and untreated groups of Ginsenosides Rh2 was higher than that in the model control group, indicating that strenuous exercise can cause a significant decrease in the body muscle and liver glycogen content, while a certain dose of Ginsenoside Rh2 can significantly slow the rate of muscle and liver glycogen consumption.

In addition to the above three points, ginsenoside Rh2 also has a stable blood sugar concentration, anti-aging, anti-inflammatory, and antibacterial effects. The main reason why Ginsenosides Rh2 is called “life-preserving” is its inhibitory effect on tumor cells, enabling cancer patients to achieve cancer-bearing survival, and improving the quality of life of cancer patients, and letting people face the death threat of cancer. At that time, giving a glimmer of hope for people’s survival is a well-deserved “life-saving”. 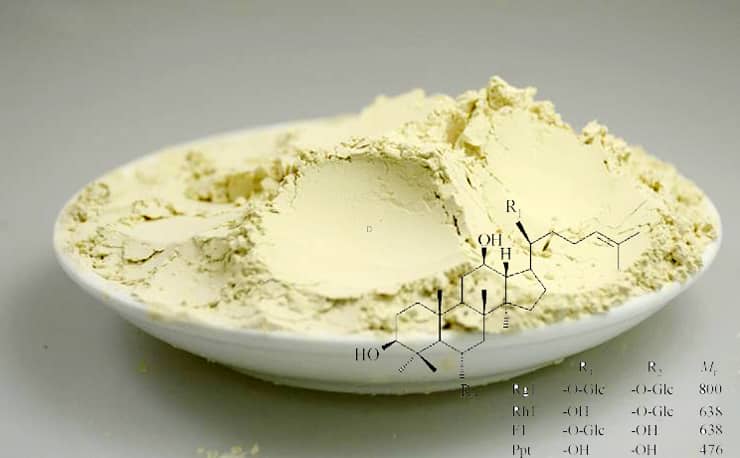