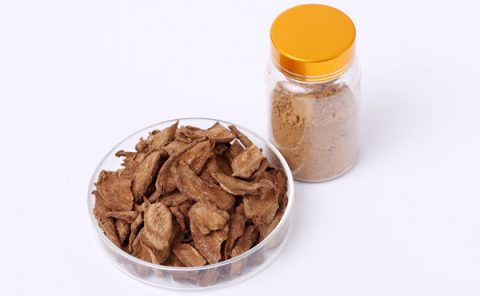 Arctium is a genus of biennial plants commonly known as burdock, family Asteraceae. Native to the Old World, several species have been widely introduced worldwide. Folk herbalists considered dried burdock to be a diuretic, diaphoretic, and a blood purifying agent. The seeds of A. lappa are used in traditional Chinese medicine,under the name NiuBangZi

Burdock is a plant whose root is sometimes used as food. Its root, leaf, and seed are used to make medicine. Burdock root extract is made from the root part of the Arctium lappa L., which is a plant of the Asteraceae(Compositae) family. The arctiin is the main active ingredient in burdock. Burdock root extract powder is a diuretic or soothes aching joints. Traditional Chinese healers used burdock seed in combination with other plants to make cures for colds, throat pain, measles, and tonsillitis. In modern times, Fructus arctii extract also used in the treatment of certain cancers.

Burdock is a traditional medicinal herb that is used for many ailments. Burdock root oil extract, also called Bur oil, is currently used in Europe in the belief that it is a useful scalp treatment. Modern studies indicate that burdock root oil extract is rich in phytosterols and essential fatty acids (including rare long-chain EFAs).

Burdock has been used both internally and externally for eczema and psoriasis, as well as to treat painful joints and as a diuretic. In traditional Chinese medicine, in combination with other herbs, is used to treat sore throats, tonsillitis, colds, and even measles. It is eaten as a vegetable in Japan and elsewhere.