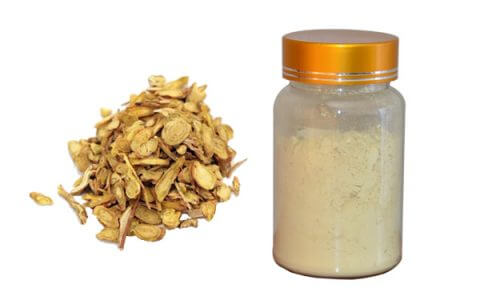 product known as PC-SPES that was used to treat prostate cancer. The U.S. Food and

the capsules were found to contain varying amounts of prescription drugs.

medicine to improve impaired brain function and to treat headaches.

and antispasmodic effect, and has strong anti-cancer response to physiological performance.

Has played an important role in clinical medicine. UV absorption of baicalin can remove

also can be used in cosmetics, is a good functional cosmetics raw materials.

Baicalin is a flavone, a type of flavonoid. It is found in several species in the genus Scutellaria, including Scutellaria lateriflora (blue skullcap). There are 10 mg/g baicalin in Scutellaria galericulata (common skullcap) leaves. Baicalin is the glucuronide of baicalein.
It is a component of Chinese medicinal herb Huang-chin (Scutellaria baicalensis) and one of the chemical ingredients of Sho-Saiko-To, an herbal supplement.
Baicalin is a known prolyl endopeptidase inhibitor, induces apoptosis in pancreatic cancer cells, and affects the GABA receptors.

Efficacy：
1.It have an effect on protection of cardiovascular and cerebrovascular diseases.
2.It can anti mutagenesis and anti-cancer .
3.It have antilipemic effect.
4.It can anti-leukemia.
5.It have immunity regulative effect.
6.It can low of blood sugar.