Magnolia is a plant, popularly being used for making medicines. The flower buds and bark of this plant are specially collected to produce several medicines. People generally use it for relieving stress, gingivitis, plaque, and to promote weight loss. It contains honokiol that duplicates the action of estrogen in the body.

Another compound is called, magnolia which is referred to as lignan, which is a plant-based nutrient-rich in insoluble and soluble fiber. It doesn’t only work for digestion but also shows a great effect to aid cardiovascular disease.

Magnolia has been associated with having some anxiety-reducing activity. To treat asthma, it might also induce steroid production in the body. The bacteria which seem to be unhealthy are efficiently killed by the chemicals present in them. Hence, the swelling of guns could be reduced, as the possibility of forming cavities has been reduced.

Alcohol reacts with magnolia– Generally, alcohol can cause drowsiness and sleepiness. The bark of magnolia may also cause the same. If a large amount of magnolia is taken with alcohol, it might result in too much sleepiness.

For adults- In the case of gingivitis, 0.3% of magnolia in the form of toothpaste is to be used twice a day. Improvement can be noticed around after three months. Chewing gum which contains Magnolia bark extract 17% and 30% of xylitol is to be chewed for 5-minutes, thrice a day. It is advised to be taken for 30 days.

As per the TCM practitioners, it helps to increase the moisture circulation in the abdomen. Which can reverse the digestive disorders and tightness of the chest, which is associated with breathing problems.

Here are some of the benefits of magnolia bark, which have been proved by researchers-

Magnolia bark has long been known as a potent anxiolytic drug ( anxiety-relieving stress).

According to a review of a study published in 2013, Honokiol appears the same as benzodiazepine drug valium. Which is used to reduce anxiety plus having far fewer motor and cognitive side effects.

According to the study published in Minerva Gynecologica, 2006 Magnolia bark does have an easing effect for the symptoms of menopause.

Investigators have found, that the supplements including magnolia bark are far extra beneficial in reliving menopausal flashes, depression, insomnia, vaginal dryness, irritability, and the loss of libido.

Magnolia bark is a productive thing to be used in cavity-fighting toothpaste, suggested in a study of Microbiology and Immunology. There are pieces of evidence showing that magnolia bark has antibacterial properties which are used to get rid of foul breath, far better than minty additives.

Magnolol kinds of lignans seem to alleviate the risk of severe cardiovascular disease. It potentially lowers down the blood fats and cholesterol in the body of an individual. By inhibiting the apolipoprotein gene, magnolol becomes able to reduce triglyceride levels.

Though being used for centuries by TCM, the side effects are known by everyone. But of course, the benefits prove themselves better and more noticeable.

Selection, preparation, and the storage

You can get these Magnolia bark supplements at any of the online stores. Even, at natural food shops and specialized stores of dietary supplements. These supplements are the susceptible alternatives to be used as they offer consistent dosage. There are no restricted and defines dosage of it. Although, it is generally recommended to have 200-400 mg per day. 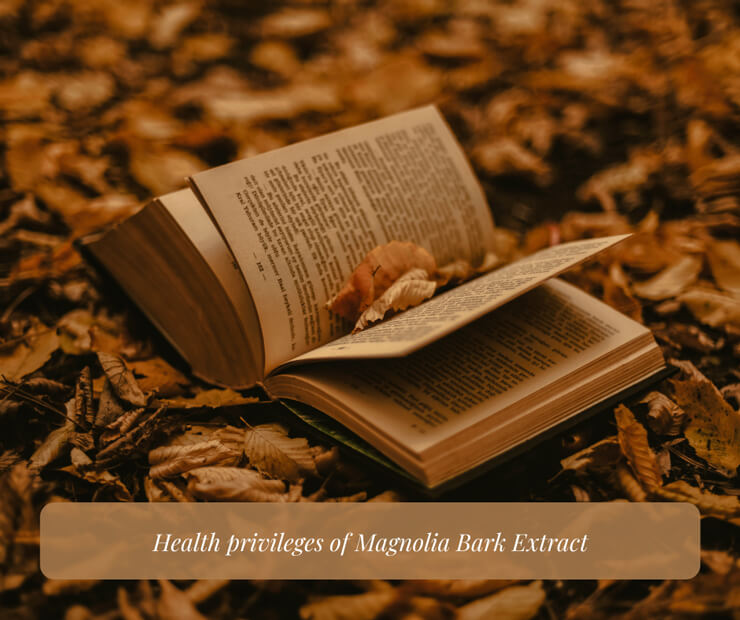